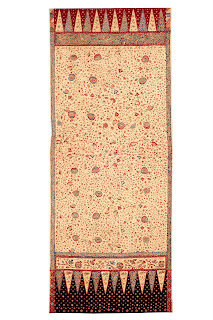 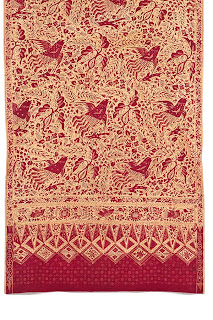 Over the coming Blogs I will share with you some of our favourite batik art works.

This is one of our favorite cloths from our collection.  Batik from Lasem is characterised by its intense red on an ivory or yellowish-white background.  This combination of colours became known as bangbangan.  We really enjoy the boldness of the motif and the sense of spirit and movement the work possesses.  It has a strong sense of youthful vitality.

It is dyed with natural dye-stuffs such as mengkudu.  Mengkudu is the red dye obtained from the roots of the mengkudu shrub (morinda citrifolia).  It is the source of the bright red colour found on pasisir batik.  Red is the colour associated with youth and fertility and would have probably have been worn by unmarried girls.  This colour combination was also associated with the wedding ceremony.
Posted by Greg Roberts at 6:53 PM 2 comments: 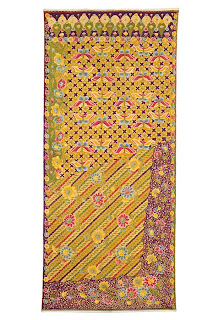 This outstanding early 20th century batik from Pekalongan has been choosen as the lead image for the exhibition, Batik of Java:poetics and politics.

The exhibition team are making great progress as we work towards the official opening on 10 July 2010 at the Caloundra Regional Gallery.  In mid November, the curator Dr Maria Friend will be making her final selection of batik works from our Collection, for the exhibition.

We will share images of these beautiful batik with you over the coming months.

Batik truly is the sacred cloth of Java.
Posted by Greg Roberts at 12:38 PM 1 comment:

UNESCO has recognised Javanese batik as an item of
Intangible Cultural Heritage of Humanity- what wonderful news this is.

To celebrate this recognition, the Caloundra and Noosa Regional Art Galleries, Queensland, Australia, in 2010 will present an exhibition,
Batik of Java: poetics and politics, that explores the links between a selection of batik from the North Coast of Java and paintings from
Dadang Christano's 2008 Brisbane exhibition, Batik Has Been Burnt. The batik will come from my and my partner's private collection and Dadang's work is represented by Jan Manton Art, Brisbane.

The curator of the exhibition is Dr Maria Friend, an internationally respected specialist on Indonesian textiles.

I will keep you posted.
Posted by Greg Roberts at 4:14 PM 1 comment: