FISHING VILLAGES IN THE VICINITY OF THE TOWN OF INDRAMAYU ON THE NORTH COAST OF WEST JAVA DEVELOPED A BOLD, DECORATIVE STYLE OF BATIK WITH MOTIFS DEPICTING LOCAL FLORA AND FAUNA POSITIONED ON A WHITE, UNDYED BACKGROUND.  INDRAMAYU IS A SMALL SUNDANESE TOWN SITUATED ON THE WESTERN PART OF THE PASISIR (north coast of Java).  IT IS SLIGHTLY WEST OF CIREBON.  WOMEN IN NEARBY FISHING VILLAGES SUCH AS PAOMAN, DEVELOPED A DISTINCTIVE STYLE OF TEXTILE DECORATION WHICH IS A FOLK INTERPRETATION OF THE OLD, ELABORATE PASISIR STYLE. 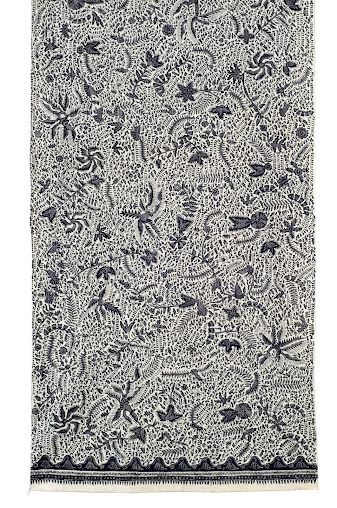 Monochrome, dark coloured cloth is known as batik kelengen and worn as a mourning garment. Flying phoenixes placed among flowers and vines replicate on cotton the lok can design of the silks favoured by the Chinese community of Java.

The motif on this cloth is known as burung Huong (Phoenix) motif which proudly exhibits its Chinese influence. Perhaps the repeated use of red and in the case of this illustrated batik, blue, in batik from Indramayu was encouraged by the Chinese, for whom red symbolised fertility, happiness, good luck; blue meant sadness, mourning, and death.  In the Qing dynasty a flying phoenix became the emblem of the empress, thus a symbol of femininity and fertility.

The batik of Indramayu is often referred to as Dermayon.  The fishermen's wives batiked while their husbands were away at sea, sometimes for as long as three or four months, in order to supplement their incomes.  For this reason they did not wish to make batiks that would take too much time to complete.  They would use a large canting on plain cloth and had very little filling of either the motifs or the background, on their batiks.  To fill the empty spaces they made cocohan (tiny dark dots) with a utensil called the complongan, shaped like a comb of sharp needles used to prick a layer of wax that covers the whole cloth, prior to the dyeing of it.  The dye penetrates the small holes and these dots take on the colour of the dye.  This myriad of small dots enhances the cloth's overall sense of detail and level of complexity. 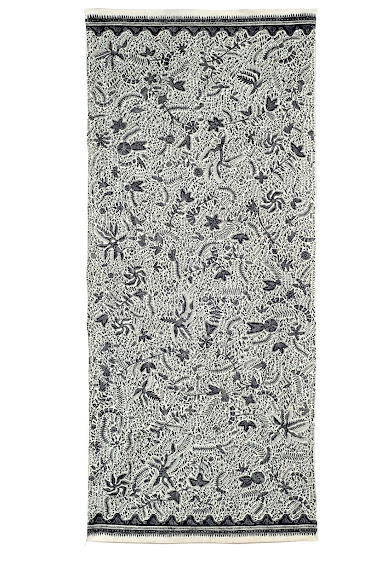 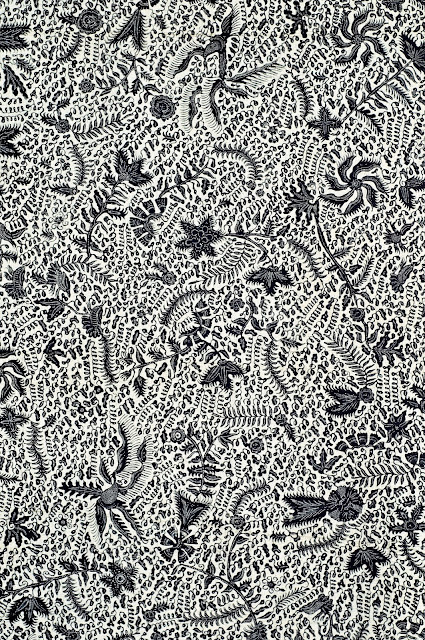 Court-influenced batik evolved in regions especially touched by or involved in the history of the Mataram kingdom in the 17th century, among others Indramayu, Cirebon, Garut and Banyumas.  The batik styles of Indramayu do include court-influenced batik.  In these times, this region, which is also called Dermayu, was a part of the kingdom of Galuh.  The batik-making culture was already an established part of of life in Dermayu, generated by merchants from Lasem trading in natural indigo, nila/tom.

Hence, batik Dermayon is similar to Lasem batik in both design and production technique.  Not only is the cocohan technique also used as background filling but also the dyeing process is the same, utilising natural indigo, nila, giving batik Dermayon a unique character: batik with the application of a single colour only (kelengan).

(It is truly wonderful to be back on my Blog.  After many many years now good health has been returned.  I hope all is terrific for each and everyone of you.  I am so looking forward to returning to magnificent Java and visiting friends and batik workshops along the Pasisir.)