People of the Banyumas regency are considered descendants from the royal families of Yogyakarta and also the Kingdom of Pajajaran in West Java.  Banyumas was considered the outermost township of the Mataram Kingdom.  Their culture was identical to that of the Principalities.  Batik is initially thought to have been an aristocratic occupation in Banyumas to fill personal requirements for this cloth.  Compared to the batiks from other coastal areas/styles, batik Banyumas blended Principality/classical designs with the coastal style including European motifs and colours.  It must be remembered that Banyumas located in western Central Java, is not a coastal town.  Batik Banyumas is commonly known as banyumasan.  It is characterised by its reddish yellow sogan base colour, with golden ivory yellows and very dark blackish blue.  The sogan base colour is similar to the colour produced earlier by Jonas, a batik maker of Dutch parentage in Solo.  The ivory yellow is a tint lighter than that used in Solo.

Harmen C. Veldhuisen wrote about a very similar kain panjang in the Rudolf G. Smend Collection, to the cloth being discussed below, (the only difference between the two cloths appears to be their border variation): The first impression is that of a batik from the Principalities.  The imitation lace border along the right and lower edge indicates however, that this batik was made in an Indo-European batik workshop or copied an Indo-Chinese batik maker.  A second look confirms this opinion.  The bird garuda is drawn in a non-Javanese way. * 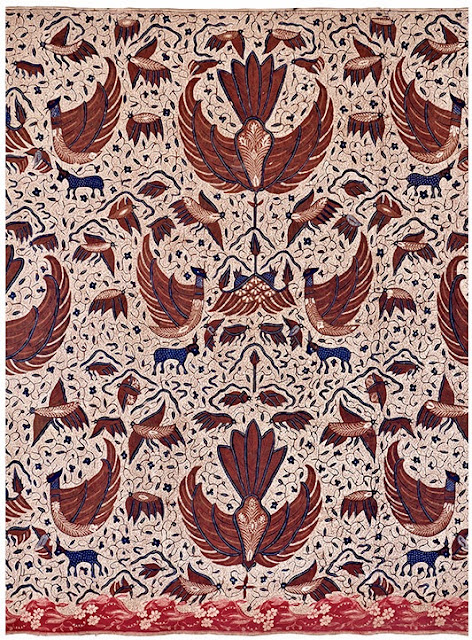 The motifs on this cloth (above and below), belong to the group of patterns/motifs/designs known as the  Non-Geometric Free-Form designs.  The most common type of non-geometric motifs, known as semen (from semi, buds or sprouting leaves), covers a huge variety of different patterns which the waxer has great freedom to interpret, provided certain traditional rules are observed.  The common element is the use of leaf-like tendrils for the background.

There are three main types of semen patterns:

1. Semen or 'sprouting life' pattern consisting only of leaves or buds, is an old Central Javanese court pattern;
2.  As can be seen on this Banyumas kain panjang, motifs depicting animals on a semen background including meru, a batik ornament shaped like a mountain always found in semen designs; and
3.  As with this Banyumas kain panjang, motifs in which animals and leaves are combined with lar (wings of the mythical Garuda).

In addition, there are three variations on the lar motif:

Traditionally the sawat is one of the ornaments reserved for the highest nobility.  Rouffaer believes it was originally a kind of crest or symbolic talisman of the 17th century Central Javanese Kingdom of Mataram under the great Sultan Agung. 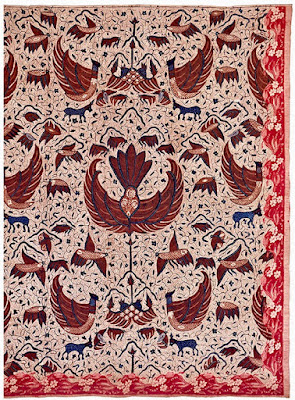 The overall style of this Banyumas kain panjang is known as materos *, with its red, blue, and black colours on an ivory background, inspired by Dutch taste.  The various components of the pattern are partially framed in an L-shaped border made up of repeated bunches of three small white blossoms on a red wave-shaped ground.  It is the lines, that make up the border, that have been waxed and the background dyed: conversely, the motifs on the central field are waxed in the negative, which requires a certain skill when drawing without the aid of a paper pattern.   The red and white wavelike materos border, up the right edge and along the long lower edge, is a signature element of batiks from Banyumas.

* Note: The batiks of a niece of Mrs. Catharina Carolina van Oosterom (nee Philips) 1816 - 1900, Mrs. Matheron (nee Willemse), were known as batik matheron or matheros.  The batiks of the other niece of Mrs. Van Oosterom, Miss Willemse, were known under the name batik Wileman.  Many of Miss. Willemse's patterns were derived from European magazines.  These two nieces inherited the batik workshop of their childless aunt, Mrs. van Oosterom.

Batik Panastroman, as Mrs. van Ossterom batiks were called in Java, were well known in West Java. The typical batik style of Banyumas was inspired by the style of Solo and Yogyakarta.  In Banyumas, however, Mrs. van Ossterom introduced the North Coast red and European motifs on the selendang (shoulder cloth for women) and on the ikat kepala (head cloth for men).  Mrs. van Ossterom was one of the foremost pioneers of Dutch Batik of the time.  She originally opened a batik workshop in Ungaran (Semarang), around 1845 and moved to Banyumas in 1855. 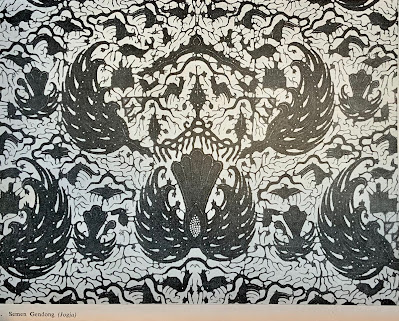 Semen Gendong motif (Jogya)
After their wedding both husband and wife hoped that their union would be blessed with offspring.  This wish is reflected in batik with the semen gendong motif (above), which expresses their wish for a baby to gendong (carry around in a sarong used as a sling).

From the publication, BATIK, Pola & Tjorak - Pattern & Motif, Penerbit Djambatan 1966, plate 62 (above) is an example of the Jogja motif, semen gendong.   On first impressions, it bears a strong visual resemblance to the Banyumas kain panjang, under discussion.  While it too consists of both, the mirong (a pair of wings) and the sawat gurdo (a pair of wings with extended fan-like tail feathers), surrounded by animals on a semen background,  the wings and tail feathers differ in their drawn appearance (drawn in a non-Javanese way), and the animals are more abstracted in their appearance compared to those on the Banyumas kain panjang (below).

While the influences in this kain panjang are Javanese (accentuated by the sawat [or Garuda], the emblem of the court of Yogyakarta), the cloth has been most likely executed in an Indo-European workshop in Banyumas.

I wish to gratefully acknowledge Tina Tabone [TINA TABONE TEXTILE ART] from whom we purchased this beautiful cloth.  I so appreciated our correspondence relating to our shared passion for Javanese batik and also, your total trustworthiness, a plus for anyone when like us, making our/their first batik purchase online.......thank you Tina.

http://www.tinatabone.com
Personal Note: This year has been life-changing for me with at last, a line in the sand drawn under 20 odd years of very poor health/pain.  Three new & brilliant medical specialists looked at my chronic head pain with fresh and inspired eyes and as a result, I have been pain-free for the last seven months and now back on my Blog, just wonderful.......Life Number Two!
...Thank You and Stay Well Always...
Please, I always greatly appreciate any comments/feedback/insights readers and textile enthusiasts may have as I firmly believe learning, appreciating and understanding is very much, an ongoing and shared process.