Cirebon was founded in 1378 by the Muslim ruler Walangsungsang.  It was the only city on the Pasisir in which court life played a significant role, inspiring the rich development of spiritual and artistic expression.  As a result of the city being a vital sea port with links to the east and west, it became a melting pot of the ancient cultures in Indonesia.  Enclaves of Chinese, Arabs and Indians were established, each group adding their own beliefs and local customs.  Cirebon became and still is today, a vibrant multinational community.

Today a visit to the palaces, or keratons, built in the Hindu-Javanese style will provide you a glimpse into this exotic lost world.  The two main palaces are Keraton Kesepuhan and Keraton Kanoman, the sultanates date back to the 17th century.

Iwan Tirta writes that from a sociological point of view, the batiks of Cirebon can be divided into two categories: those for the royal families, batik keratonan, and those for people outside the palace walls, batik kenduruan [Iwan Tirta, BATIK: A Play of Light and Shades, p99, Jakarta: Gaya Favorit Press, 1996].

With the decline of the sultans many of the keraton batik have been lost.  As mentioned in an earlier Post, H. Mohammed Masina and his wife revived some of the sacred royal patterns of the courts of Cirebon.  It actually was the Madmil family who initally recovered some of court patterns but because of the excellent craftsmanship of the Masina workshop, it is given the credit for the recovery.

The 12 different motifs making up the sampler below, are drawn in a rich Chinese blue on a warm cream background.  The line work is very fine and of great clarity.  The figures also possess a sense of movement and rhythm.  In Cirebon, even daily scenes from the court became a motif depicted on a cream background.  There are a range of keraton motifs here that you will recognize: the megamendung, or stormy cloud design; wadas, patterns of  layered rock or coral; the fragrant garden motifs, taman arum, which echoed the medative landscape retreats of Cirebon's rulers; and there are also shapes similar to the gunungang or kayon, a tree of life motif. 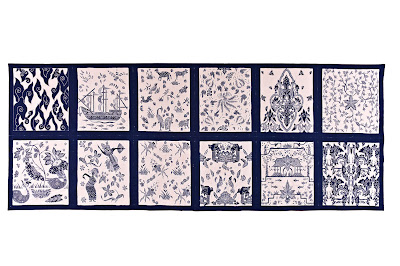 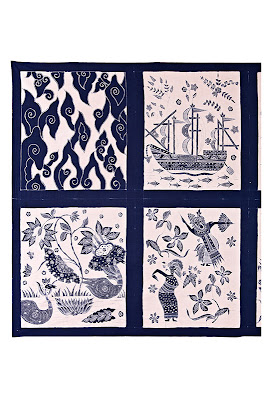