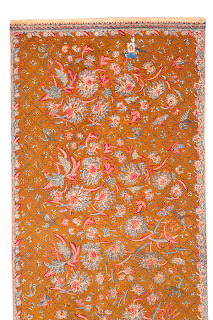 
This page is devoted to a batik tiga negeri work or 'three countries' batik where the cloth is dyed in three towns.

My apologies for the lack of postings in recent times but I look forward to continuing to share my passion for north coast of Java (Pasisir) batik with you.  In upcoming postings I will share with you some of the new batiks that have come into the collection.  These include a magnificent art work done in the Kudus style by Mrs. Jane Hendromartono (nêe Oey Djien Nio).  She signed her batiks with her husband's name, Liem Siek Hien.  She is a third generation batik artist following in the tradition of her mother (Oey Kok Sing), and grandmother (Oey Soen Khing).

I really appreciate any comments or insights to Pasisir batik you may wish to share.  In particular, I would like to hear from anyone who can tell me more about the Tjoa Siang Hing workshop where this beautiful work above, was produced.

The  name tiga negeri- 'three countries' indicates that this fabric was dyed in three towns, each of them famous for producing a particular type of colour with natural dyes.  For example, following the first dyeing in Lasem in red (mengkudu), the fabric was sent to Kudus to be dyed in blue (indigo) and then to Surakarta to be dyed in brown (soga).  Each time new wax designs had to be drawn.
Fabrics of this kind became popular in the 1920s and 1930s.  The production was usually coordinated by Chinese businessmen.  The label on this cloth names the workshop of Tjoa Siang Hing as the producer of this cloth.
The complex, eclectic style of this cloth reflects the diversity of local traditions which contributed to its execution.  While the brown trellis motif of the background is typical of the wedding cloths of central Java, the flowers- chrysanthemums and peonies- were favoured by Chinese clients from the north coast of the island.
(Dr Maria Wronska-Friend- from the extended label for the work in the exhibition, Batik of Java: poetics and politics, organised by Caloundra Regional Gallery: www.caloundraregionalgallery.org.au).