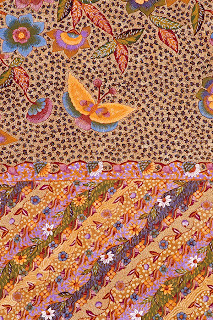 While on a trip along the north coast of Java in 2007 we spent time in Cirebon, a city we fell in love with.  One of the batik workshops we visited was Batik Madil where we spent a couple of hours with batik artist Ega Sugeng.  Batik Madil is in the village of Trusmi.  It was truly wonderful to be shown the batik that has been developed at the workshop since late 19th century.  It was a difficult process but we finally decided to commission a kain sarong incorporating the kembang rangdu negerian motif which the workshop first created in 1912.  The work took almost twelve months to complete.  We strongly believe in supporting batik artists who are creating batik today as well as collecting older pieces of batik cloth.

This flawlessly executed cloth (above image is a detail), is embellished by its multiple colours (12), and bright summer flowers and butterflies depicting the high season of life.  The kepala is made up of slanting bands or dlorong.  Each band varies in colour, the type of flower and vary intricate isen.  The border of the badan is a repretition of one of the dlorong making up the kepala.  This is an extremely dynamic art work with great boldness and strong harmony- its young, vital and beautiful.

The Madmils are natives of Trusmi and have been making batik for generations.  The Madmils are credited with unearthing and reviving some of the sacred royal patterns of the Court of Cirebon.

We wish to acknowledge our good friend Ajib who safely drove us on this journey of discovery from Yogyakarta, west to Bogor, up to Indramayu, east along the coast and returning to Yogya via Solo.
Posted by Greg Roberts at 10:49 PM